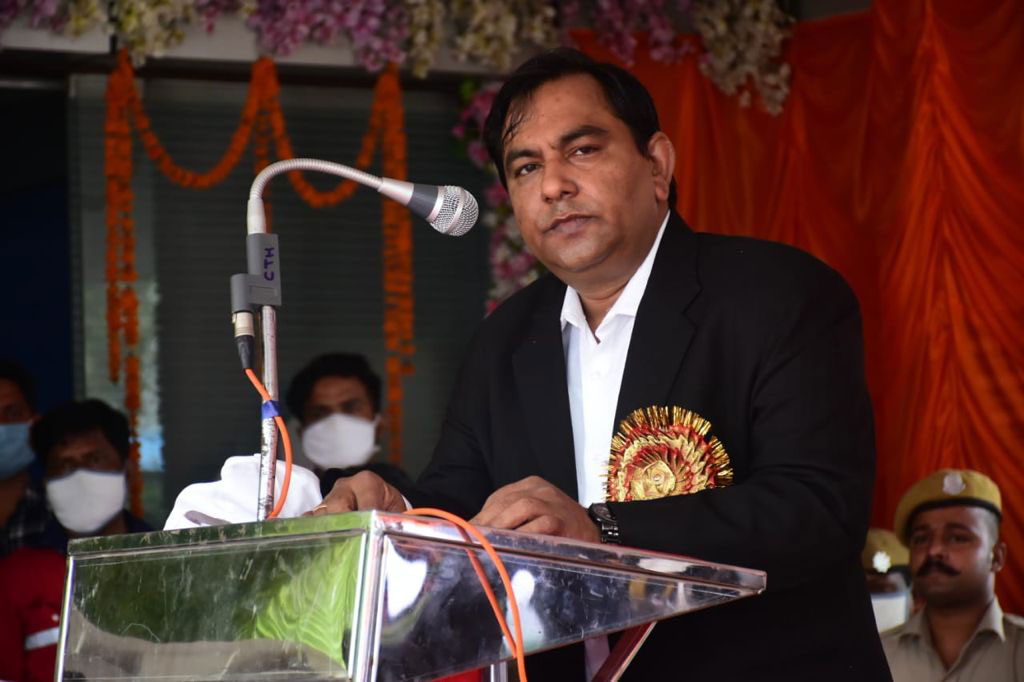 Balconagar, Korba, August 17th, 2021: Bharat Aluminium Company (BALCO), India’s iconic aluminium producer, celebrated India’s 75th Independence Day by paying homage to the freedom fighters and all the frontline warriors at Aluminium Bhawan. Mr. Pankaj Sharma, Dy. CEO, BALCO, hoisted the National Flag, which was followed by singing of the National Anthem.  Addressing the audience on BALCO’s role in the nation’s growth story, as one of India’s leading aluminium producers, he reignited the employees and business partners’ sense of duty towards nation building. Mr. Subhadeep Khan, Dy. CHRO, gave the vote of thanks in the event.

Speaking on the occasion Mr. Pankaj Sharma, Dy. CEO, BALCO, said, “BALCO has significantly contributed towards bolstering Chhattisgarh and India’s socio-economic development in its journey of 55 years. Producing 20% of the country’s aluminium, BALCO has been a transformative force, creating economic opportunities worth thousands of crores in the state. We stand true to our ethos of Zero Harm, Zero Waste & Zero Discharge, which underpins all that we do. With plans for capacity addition, BALCO stands poised to join the global ‘One Million Tonne Club’, strengthening India’s position as the aluminium capital of the world.”

Vedanta has launched an ad film Atmanirbhar Bharat and a music video Hum Hindustani on Independence Day. ‘Hum Hindustani’ song was showcased during the event, a tribute by Vedanta to human resilience in the face of adversity. Sung by the stalwarts of the Indian music industry, this song is an ode to the courage, hope and togetherness of Indians. Atmanirbhar Bharat advertisement was showcased during the event which reiterates our commitment to create a self-reliant India.

Mr. Sharma also visited the Graduate Engineer Trainee Hostel along with other members from senior management. He addressed the young audience on their role as young leaders and their focused efforts in India’s growth as a self-reliant nation. Many recreational activities were organized for the employees where all the safety and health protocols were followed. Mr. Sharma visited the BALCO Hospital where he met the patients and distributed fruits. He conveyed his gratitude and appreciation towards all medical professionals for their selfless dedication and persistent fight against the global pandemic. He also thanked the frontline warriors for going beyond the call of duty in saving lives during the challenging time of the pandemic.

Bharat Aluminium Company Limited (BALCO) is India’s iconic aluminium producer. It is owned 49% by the Government of India and 51% by Vedanta Limited. BALCO is part of Vedanta’s Aluminium Business, a division of Vedanta Limited, which is India’s largest manufacturer of aluminium. BALCO operates a 0.57 million tonne per annum aluminium smelter in Korba, Chhattisgarh. It is also a leader in value-added aluminium products that find critical applications in core industries. With its world-class smelter and power plants, the company fulfills its mission of spurring emerging applications of aluminium as the ‘Metal of the Future’ for a greener tomorrow.

Vedanta Limited, a subsidiary of Vedanta Resources Limited, is one of the world’s leading Oil & Gas and Metals company with significant operations in Oil & Gas, Zinc, Lead, Silver, Copper, Iron Ore, Steel, and Aluminium & Power across India, South Africa, Namibia, and Australia. For two decades, Vedanta has been contributing significantly to nation building. Governance and sustainable development are at the core of Vedanta's strategy, with a strong focus on health, safety, and environment. Giving back is in the DNA of Vedanta, which is focused on enhancing the lives of local communities. Under the aegis of Vedanta Cares, the flagship social impact program, Nand Ghars have been set up as model anganwadis focused on eradicating child malnutrition, providing education, healthcare, and empowering women with skill development. Vedanta and its group companies have been featured in Dow Jones Sustainability Index 2020, and were conferred Frost & Sullivan Sustainability Awards 2020, CII Environmental Best Practices Award 2020, CSR Health Impact Award 2020, CII National Award 2020 for Excellence in Water Management, CII Digital Transformation Award 2020, ICSI National Award 2020 for excellence in Corporate Governance, People First HR Excellence Award 2020, ‘Company with Great Managers 2020’ by People Business and certified as a Great Place to Work 2021. Vedanta’s flagship Nand Ghar Project was identified as best CSR project by the Government of Rajasthan. Vedanta Limited is listed on the Bombay Stock Exchange and the National Stock Exchange in India and has ADRs listed on the New York Stock Exchange.